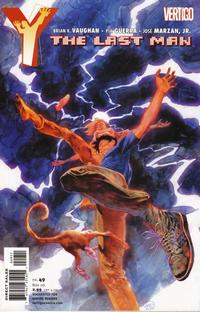 Allison reveals her plans to clone 200 males, the first of course being Yorick, and the rest harvested from the DNA of dead human males, to him, 355 and Rose. She later collapses as the cumulative side effects of her earlier attempt to clone herself have now become impossible to hide.

Retrieved from "https://heykidscomics.fandom.com/wiki/Y:_The_Last_Man_Vol_1_49?oldid=1470161"
Community content is available under CC-BY-SA unless otherwise noted.