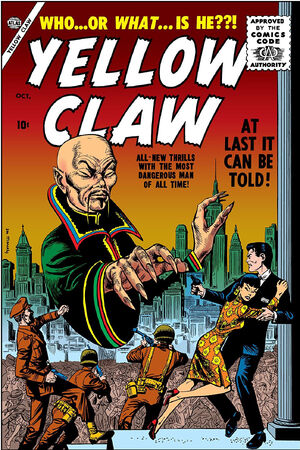 Appearing in "The Coming of the Yellow Claw!"Edit

Synopsis for "The Coming of the Yellow Claw!"Edit

The Chinese Communist High Command meets in Kunming, Yunman province. Their planned invasion of Formosa (Taiwan) has failed because of the American presence there. General Mao Sung suggests to General Chu that they recruit a "century-old mystic" he has heard about: the Yellow Claw. Accordingly, Mao takes a jeep to Tibet. When he asks the peasants how to find the Yellow Claw, though, they flee in terror.

Mao finally meets someone who will talk to him: a young woman who introduces herself as Suwan, the Yellow Claw's grandneice. She leads him to a palace and vanishes. Mao ventures inside. The Yellow Claw already knows the purpose of Mao's visit; he agrees to go to America and pave the way for a Communist takeover of the world. The Yellow Claw and Suwan travel to San Franciso's Chinatown and establish their base in a curio shop. And in Washington, DC, a young FBI agent named Jimmy Woo little suspects that he is about to get the case of his life....

Appearing in "The Yellow Claw Strikes!"Edit

Synopsis for "The Yellow Claw Strikes!"Edit

Through a crystal ball, the Yellow Claw watches Rocky Miller, a three-time loser in San Quentin. He visits Miller incognito and proposes a bargain: if he can get Miller out of prison, Miller will go to work for him. Having little choice, Miller agrees. The Yellow Claw tells him to expect a package that includes a pack of cigarettes. One of them has no brand label; he should smoke it before turning in.

The next morning a guard finds Miller apparently dead. Fritz von Voltzmann, the Yellow Claw's lieutenant and a former concentration-camp commandant, claims the body. In the back of his curio shop, the Yellow Claw revives Miller, who has second thoughts about their bargain. Realizing that he faces a quick trip back to prison, though, he takes his first assignment. Voltzmann hears a customer entering and sends Suwan out to allay any suspicions.

Meanwhile, Jimmy Woo, now in Chinatown, has learned that the curio shop recently changed hands, and the previous owner has disappeared. He visits the shop and talks to Suwan, who confirms that her granduncle bought the place from Ming-How. Woo, however, becomes suspicious because a legitimate shopkeeper would dust the merchandise. He takes up surveillance across the street.

Not long afterward, Miller emerges from the shop. Woo becomes suspicious because Miller was not in the shop earlier and did not enter from the street. He trails Miller. Voltzmann, who intended to trail Miller, notices Woo trailing Miller and instead trails Woo.

When they reach the Amalgamated Chemical Company, Woo recognizes Pierson of the Secret Service emerging from the building with a briefcase. Miller koshes Pierson and drags him into an alley. Woo quickly follows and gets the drop on Miller. Voltzmann follows and koshes Woo. Woo wakes up in the cellar of the curio shop, tied to a chair. He tells Miller that the briefcase contains secret formulas that Pierson was delivering to the government; if he gives the briefcase to a Chinese agent, he is committing treason. Voltzmann draws his gun and demands the briefcase. Miller hits him with it, but Voltzmann gets off a shot and flees. Mortally wounded, Miller unties Woo before he dies.

Appearing in "A Trap for Jimmy Woo!"Edit

Synopsis for "A Trap for Jimmy Woo!"Edit

The Yellow Claw, Voltzmann, and Suwan load their gear onto a truck before Woo can return with the FBI. The Yellow Claw tells Suwan to stay behind, much to her consternation. Woo shows up with a squad of agents, who find nothing incriminating. Suwan tells Woo that her granduncle plans to gain world domination for himself, not for the Chinese Communists, and that she helps him only because he controls her by hypnosis. The agents leave.

Woo, however, doubles back and watches the shop. An old man enters, gives Suwan a note, and leaves. She immediately leaves, with Woo close behind, unaware that he has fallen into the Yellow Claw's trap.

Suwan suggests they trade Woo for the chemical formulas. The Yellow Claw agrees but tells Voltzmann to follow her to the FBI offices, let her make the deal, and then take her to a different address.

Voltzmann and Suwan later appear at the waterfront address. The exchange will take place on Pier 57. The Yellow Claw tells Voltzmann to put a hood on Woo so that he cannot identify their new base; Suwan offers to do it and goes into the next room.

Nearly arrived at the pier, Voltzmann pulls the hood off Woo but finds Suwan in his place! She claims that Woo got loose, put her in his place, and escaped. At the same time, Woo tells his partner, Phil Kane, that the switch was Suwan's idea.

Retrieved from "https://heykidscomics.fandom.com/wiki/Yellow_Claw_Vol_1_1?oldid=1547546"
Community content is available under CC-BY-SA unless otherwise noted.