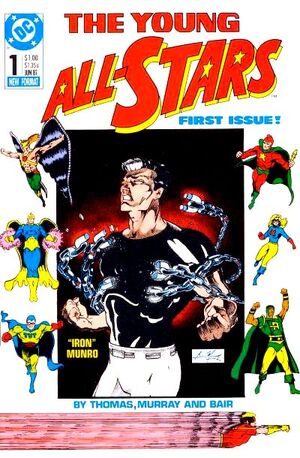 Appearing in "The Coming of the Young All-Stars"Edit

Synopsis for "The Coming of the Young All-Stars"Edit

Helena Kosmatos, the young girl known as Fury, has a premonition that she saw a giant version of a robot named Mekanique attack and slaughter the entire assembled All-Star Squadron. Her guardians, Johnny Quick and Liberty Belle, decide to take Helena to their headquarters to find out. Tsunami appears unto Neptune Perkins and reveals that her family has been taken into a Japanese interment camp and she now seeks his help. The Royal Canadian Air Force deal with a mysterious flying man in a furry cape, who turns out to be Flying Fox. TNT and Dan the Dyna-Mite deal with Nazi saboteurs planning to blow up a dam in Indian Creek, Colorado, which results in TNT being killed and his soul being taken by Gudra the Valkyrie to Valhalla. Iron Munro comes to the rescue of Dyna-Mite, but is unable to save his partner TNT from Gudra.

Retrieved from "https://heykidscomics.fandom.com/wiki/Young_All-Stars_Vol_1_1?oldid=1470127"
Community content is available under CC-BY-SA unless otherwise noted.