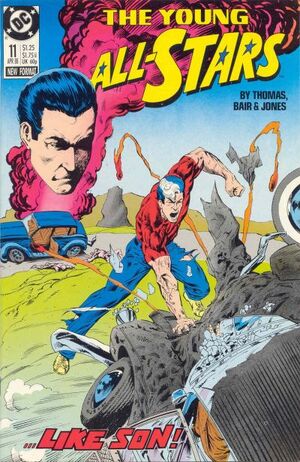 This is the second part of the two-part story revealing the origin of Iron Munro. As the Young All-Stars join Iron Munro on a trip to Indian Creek, Colorado to meet Iron's mother, she reveals to her son that Hugo Danner, her lover in college, didn't die in that expedition in South America, but faked it and went into hiding, appearing unto her when her husband was away on a business trip to make love to her before he vanished. Iron was born from that union and inherited the same powers, but his mother warned him to keep his abilities a secret so that he would not have to endure the same alienation his father did (whom she never mentioned until this time). The rest of the group learned that Iron indeed had a hard time trying to keep his abilities a secret, even during a baseball game.

Retrieved from "https://heykidscomics.fandom.com/wiki/Young_All-Stars_Vol_1_11?oldid=1470107"
Community content is available under CC-BY-SA unless otherwise noted.