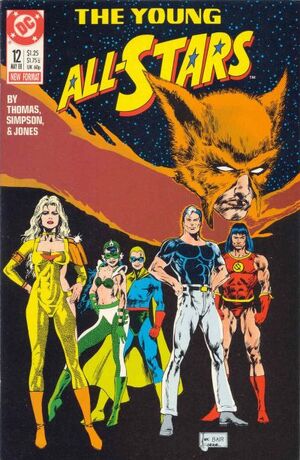 I'll never understand women -- not if I live to be twenty-one!

Appearing in "M" is for "Monster"!Edit

Synopsis for "M" is for "Monster"!Edit

May 20th, 1942
Iron Munro poses in his new costume. Fury snickers at him, and Munro returns the jest by making fun of her armor. Fury grows agitated and runs off. She ascends an elevator and runs into Mekanique, Amazing Man and Robotman. Seeing Mekanique calls to mind a dream she had wherein Mekanique was destroying the All-Star Squadron. The intense emotion calls forth the Blood Avenger, but Helena faints before the possessing spirit can overwhelm her. At Robotman's suggestion, the All-Stars take her to Project M - a top secret government facility located beneath the Statue of Liberty at Bedloe's Island. The team arrives at Project M where they meet Professor Mazursky and Doctor Chuck Grayson. The Project is involved in many strange experiments which includes a G.I. Robot, a covert team of Creature Commandos and the preserved remains of a prehistoric dinosaur as well as that of a gigantic gorilla. The All-Stars also discover that Project M is in possession of the comatose body of Miss America (held in suspended animation). While the scientists begin to analyze Helena in an effort to rid herself of the Blood Avenger, Mazursky's lab assistant engages in his own private schemes. The lab tech is actually the time traveling villain Per Degaton. Per Degaton provides a way for another villain, Deathbolt, to enter the Project. Deathbolt carries with him the disembodied brain of the Ultra-Humanite. It is the Humanite's objective to transfer his brain into the body of the giant gorilla. Flying Fox learns of the intruder's presence and engages Deathbolt. As the two fight one another, the Ultra-Humanite transfers his essence into a new host body. He fails to secure the form of the gorilla as originally intended, but instead takes command of a Tyrannosaurus. The Ultra-Saurus begins thrashing throughout the laboratory much to the dismay of the other All-Stars.

Retrieved from "https://heykidscomics.fandom.com/wiki/Young_All-Stars_Vol_1_12?oldid=1470105"
Community content is available under CC-BY-SA unless otherwise noted.