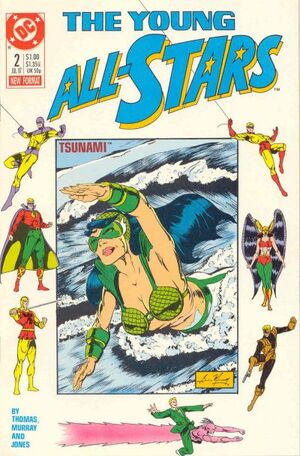 Appearing in "A Gathering Of Heroes!"Edit

Synopsis for "A Gathering Of Heroes!"Edit

Tsunami and Neptune Perkins appear unto Green Lantern during the middle of filming a war-bonds promotion commercial where she reveals more of why she came to Neptune Perkins: she was being recruited by a member of a Nazi-created supervillain group called Axis Amerika, which she purposely turned down. Iron Munro is joined by Shining Knight as they visit Dan Dunbar, the Dyna-Mite, as he is recovering in the hospital. Johnny Quick and Liberty Belle bring Helena Kosmatos to the All-Star Squadron's headquarters to meet the rest of the group when Axis Amerika attacks them on their own turf, powerfully felling those who came against them. Seeing her guardians fall before their power, Helena becomes angry enough to transform into her superpowered self known as Fury.

Retrieved from "https://heykidscomics.fandom.com/wiki/Young_All-Stars_Vol_1_2?oldid=1470125"
Community content is available under CC-BY-SA unless otherwise noted.