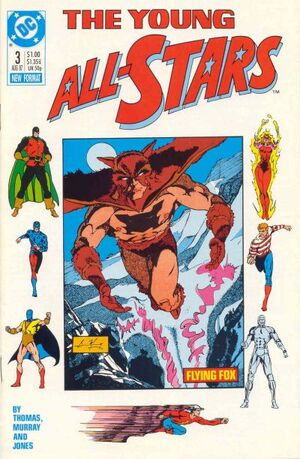 Appearing in "A Call To Arms"Edit

Synopsis for "A Call To Arms"Edit

Fury joins the fray, as do Flying Fox and Iron Munro, as they help fend off the new superpowered villain group known as Axis Amerika at the All-Star Squadron headquarters. As the villains retreat, Green Lantern joins with Neptune Perkins and Tsunami in tow as the members of the All-Star Squadron decide what to do with these new young heroes. It is when Dan the Dyna-Mite returns with President Franklin D. Roosevelt that Hawkman and Liberty Belle decide to give these members probationary status as members of a youth auxiliary to the All-Star Squadron.

Retrieved from "https://heykidscomics.fandom.com/wiki/Young_All-Stars_Vol_1_3?oldid=1470123"
Community content is available under CC-BY-SA unless otherwise noted.