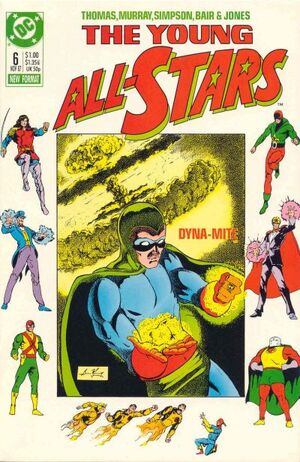 Appearing in "The War Within!"Edit

Synopsis for "The War Within!"Edit

Dan the Dyna-Mite gets help from Sandy, Neptune Perkins, and Tsunami to rescue their captured companions Fury, "Iron" Munro, and Flying Fox from Axis Amerika holding them hostage on an island off the California coast. Reaching the island, Dyna-Mite discovers that he can still use his powers by wearing and pressing both dyna-rings together -- which enables him to free "Iron" Munro from his concrete prison. Gudra then attempts to attack Dyna-Mite with her spear, ready to have the young hero join his mentor in Valhalla, when Fury transforms into Tisiphone the Blood Avenger, killing Fledermaus and causing the rest of Axis Amerika to flee the island, leaving the Young All-Stars to calm Fury until she returns to normal. Some time later, the Young All-Stars show up for an exhibition baseball game which a new "mystery woman" named Tigress oversees.

Retrieved from "https://heykidscomics.fandom.com/wiki/Young_All-Stars_Vol_1_6?oldid=1470117"
Community content is available under CC-BY-SA unless otherwise noted.