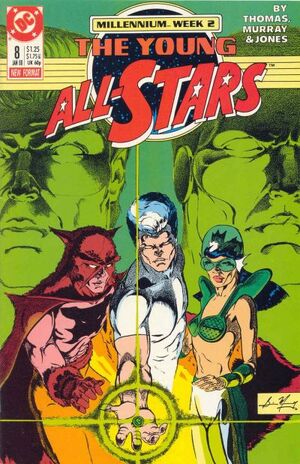 Appearing in "Manhunters of the World, Unite..."Edit

Synopsis for "Manhunters of the World, Unite..."Edit

In 1942, both Manhunters are transported into the chamber of the Manhunter Grandmaster, who informs them of the present danger: Alan Scott, the Green Lantern. They alert the members of the Young All-Stars, who along with Doiby Dickles have found out that Green Lantern has attacked a Japanese P.O.W. camp in Hawaii and let loose one of its prisoners. Flying Fox, Tsunami, and Dan the Dyna-Mite travel to Alaska with one of the Manhunters, where Green Lantern is now scaring a group of Inuit Eskimos from their residence. The three Young All-Stars engage Green Lantern in order to stop him, but are unable to do so as they are all felled by him.

Retrieved from "https://heykidscomics.fandom.com/wiki/Young_All-Stars_Vol_1_8?oldid=1470113"
Community content is available under CC-BY-SA unless otherwise noted.