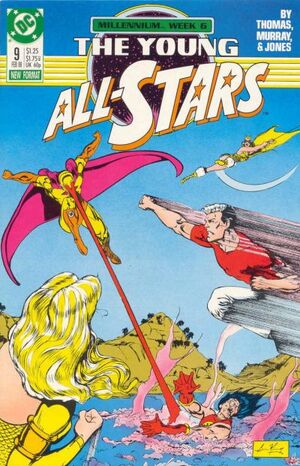 Appearing in "...You Have Nothing to Lose But Your Souls!"Edit

Synopsis for "...You Have Nothing to Lose But Your Souls!"Edit

Iron Munro, Fury, and Neptune Perkins join one of the Manhunters as they travel to the Carribeans to try stopping Green Lantern, who has come to the rescue of a young Jamaican orphan girl as she is being captured by Baron Blitzkreig. It is at this point that the Tigress, who has stowed away on their plane, reveals herself to the group. Green Lantern willingly surrenders his ring to the All-Star Squadron for his actions when the Green Flame within reveals that this actions were to prevent the deaths of three crucial individuals who would become the parents of those that will be selected as part of the Millennium project in the present day.

Retrieved from "https://heykidscomics.fandom.com/wiki/Young_All-Stars_Vol_1_9?oldid=1470111"
Community content is available under CC-BY-SA unless otherwise noted.