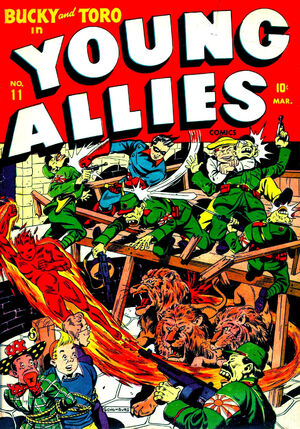 Appearing in "The Spawn of Death"Edit

Synopsis for "The Spawn of Death"Edit

The Young Allies are at a local dock to try and prevent information about American convoys from being leaked to Nazi spies. Spotting some men beating on some sailors, the Young Allies come to his aid sending his attackers fleeing. They carry the beaten sailor back to his ship and offer their services to the captain. The captain refuses to let the boys join the crew because they are too young. However, as the ship pulls anchor and sets sail for Europe, the Young Allies stow aboard in the cargo hold. They are soon found when the ship is out at sea thanks to Tubby's sneezing and they are brought before the captain who agrees to give them a chance to earn their keep aboard the vessel. The boys soon find themselves swabbing the poop-deck for all their trouble, a job they don't like overly much but do anyway.

However the doldrums end when the ship is suddenly attacked by a Nazi battleship. When the ships gunners are killed defending the ship, the Young Allies try to defend it, but it proves to be fruitless. With the ship incapacitated the Young Allies watch as the Nazis begin rounding up the survivors. However, the Young Allies resist the Nazi soldiers boarding but are soon overpowered and loaded aboar a Nazi sub. Despite their loss, an American bomber destroys the German battleship before the U-Boat lowers below the ocean. The furious captain of the U-Boat tells the Young Allies that he intends to put them to work for the Third Reich.

The Young Allies soon find themselves transported to France where they are to be taken to a concentration camp and put to work. When the transport truck carrying them gets caught at a barricade put up by Free French resistance fighters trying to stop an ammunition convoy. The Young Allies use this moment to break free and mow down their attackers. Leaving one of the Nazis alive to question, they learn that the prisoner truck was sent first to be caught in any potential ambushes before the ammunition convoy passed through the area. The Allies gun down the Nazi and then prepare an ambush for the ammunition convoy, destroying it with little opposition.

Finding a secret Nazi airfield, the Young Allies soon find themselves surrounded by soldiers. In order to avoid trouble, they all pretend to be French citizens, relying on a crash course in French from Jeff, however Whitewash lets some English slip out blowing their cover when they are brought before the German commanding officer. They are then put to work building shells for the Nazis until a French prisoner named Le Clere tells them of a secret cache of weapons hidden by French resistance fighters on the Maginot line. The Young Allies them rally together, breaking out of the prison camp, relying on Toro's flame powers to blow up the ammunition stores.

Travelling to the Maginot line, they find the ruined base previously used by the French and locate the hidden weapons. When they capture a Nazi soldier who stumbles upon them, they feed him with false information of a gathering of troops that will be armed in the area and allow the Nazi to escape to tell his superiors. This of course, leads the Nazis into a trap where the Young Allies catch them off guard and decimate their ranks.

Rushing back to the camouflaged Nazi airfield they spot some American fighter planes passing by and Toro uses his flame powers to signal them to attack the base. Stealing a German Focke Wolff, they take to the air and help shoot the German fighters out of the air for the Americans. However, despite their superior gunning skills they take some hits themselves and crash into the ocean. Spotting a Nazi bouy, they seek refuge aboard it. When a group of Nazis arrive to rescue their "comrades", the Young Allies jump them and take control of their boat, forcing them onto the buoy while they escape back to the United States in the boat.

Appearing in "Black Magic of Merlin"Edit

Synopsis for "Black Magic of Merlin"Edit

Tommy Tyme is taken to a magic show, but the lad is not impressed with the performance by a man who is calling himself Merlin. He tells his mother that he does not believe in magic -- which is ironic considering his magic time travelling clock came from a genie. This is heard by the magician who trips Tommy causing his clock to fall out of his pocket. The magician then commands the clock to send Tommy to the age of magic.

Sure enough, Tommy is transported back to 6th Century Engalnd, where he spots the Black Knight terrorizing a young maiden. Tommy uses his sling shot to shoot a pebble into the knights throat. This does nothing more but anger the knight who is about to strike down Tommy when Merlin steps in and uses his magic to teleport the Black Knight away.

Deciding to show the Black Knight a thing or two, Tommy Tyme learns the location of his castle and rushes there to face him again. When he is confronted by the dragon that defends the castle, Merlin steps in once again to rescue the boy from danger. Getting into the castle, Merlin makes himself visible to Tommy and tells him that King Arthur and his knights have been captured by the Black Knight and shows him where they are kept and where the armory is.

Tommy helps spring King Arthur and his knights and leads them into a battle with the Black Knight's men which ends in the slaughter of the foes. With the battle over and King Arthur restored to power, he knights Tommy Tyme before he is sent back to his own time. There he comes around and has a greater appreciation of magic than he did before.

Appearing in "Osaki, the Murderous Jap"Edit

Synopsis for "Osaki, the Murderous Jap"Edit

The Young Allies are taken for a ride aboard an American bomber that is suddenly under siege by Japanese spies led by Captain Osaki. Holding the Young Allies and captain at gun point, but try to fight off their attackers. They stop when Osaki grabs Bucky and threatens to kill him if the Allies don't stand down. Osaki explains that he is taking the ship to use it to bomb American targets, knowing that the American military would not suspect one of their own bombers to be responsible for the attacks.

They are forced to take the plane back to a Japanese aircraft carrier where Toro is forced to wear an asbestos smock and they are locked up in the prisoner hold. When the boys are taken out to be forced to watch Osaki bomb American targets with the stolen bomber, the Young Allies make a break for it and try to fight to freedom. They are overpowered and then tied to the bombs that are going to be dropped. However, the bay doors malfunction and Osaki is forced to take off with the bomb bay doors open. This allows the Young Allies to untie themselves and scaling the outside of the plane manage to sneak back inside.

Retrieved from "https://heykidscomics.fandom.com/wiki/Young_Allies_Vol_1_11?oldid=1557954"
Community content is available under CC-BY-SA unless otherwise noted.