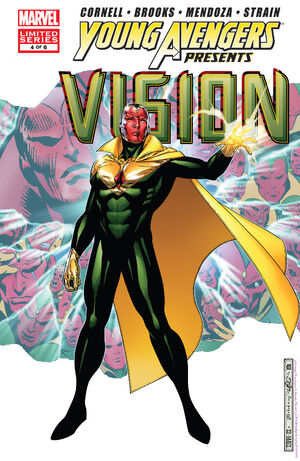 And through this I became certain: I am one particular individual. Me. Whoever that is. It is a start. I am not a "what", Cassie! I am a "who".

The Vision is secretly watching Cassie Lang/Stature. He then disguises himself as Tony Stark to get her off of Camp Hammond, so he could have a private chat with her at a nearby diner, unaware that they are under surveillance by AIM. Cassie becomes uncomfortable that he's looking like Stark, so he changes appearance to Iron Lad, which she finds a little offensive. Vision then goes on to explain that after the Superhuman Civil War, he went around the world trying to find himself. After many disguises and quests, including a search for Wanda Maximoff, he realized that as a hybrid of the original Vision and Iron Lad, he is completely different person. That is why he chose his side in the war, because the original Vision and Iron Lad would've made different choices. He then rejects her offer to join the Initiative, for he really wanted to see how distant she was from the other heroes. Cassie presumes that he's here to recruit for the anti-registration side. She then launches into a lecture over how refusing to register results in trouble.

However, their little date is interrupted by AIM, who fire an energy weapon at him. Cassie attempts to stand up in her teammate's defense, only for him to accidentally phase his hand through her chest as it solidified, preventing her from changing size. The beekeepers then demand that either they both come quietly, or they'll take the android from Cassie's corpse. But the Young Avengers are able to fight them off. The beekeepers the flee, knowing that Cape-Killers are going to flood the place any minute. Vision, asking that he'd be called Jonas, asks Cassie if she's going to turn him in, to which she replies no. With the Vision camouflaging with his surrounding, Cassie is able to bluff to the Cape-Killers that AIM was after her. She then walked to a hidden area, where she is able to grow to a size at which the Vision could free himself. They then resumed their conversation on a barnhouse roof, where the Vision tells Cassie that though he may have Iron Lad's brain patterns, he's a completely different person who shares his feelings for her. They share a kiss, before Cassie states that she wants some time to think about this.

Retrieved from "https://heykidscomics.fandom.com/wiki/Young_Avengers_Presents_Vol_1_4?oldid=1471045"
Community content is available under CC-BY-SA unless otherwise noted.