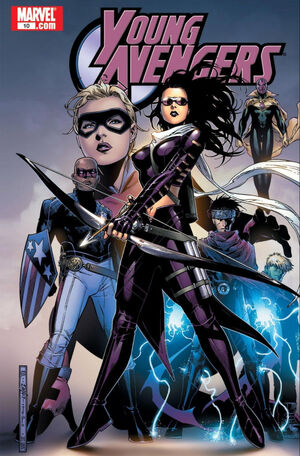 I wanted a Young Avenger. Not a Young Master of Evil.

At Avengers Tower, the Vision plays chess with Jarvis, and the two discuss Vision's exclusion from Avenger missions before Kate Bishop, Patriot, Stature and Wiccan arrive outside the window. The Young Avengers explain that the Super-Skrull kidnapped Teddy, and Jarvis orders the teenagers to remain at the Tower while he contacts the Avengers.

After Jarvis leaves them alone, Vision offers to "locate...more Young Avengers" and accesses the Avengers fail-safe program to identify Thomas Shepherd, a "speedster" who "can use his speed to accelerate and destabilize atomic matter" and "blow stuff up," and the team heads to New Jersey to recruit Shepherd. When Cassie expresses misgivings regarding the Vision's physical similarity to Iron Lad, Vision alters his appearance to more closely resemble the original Vision.

Arriving in New Jersey, the Young Avengers discover Shepherd incarcerated in a juvenile detention facility for having "accidentally vaporized his school." Vision and Wiccan both take on the appearance of police officers and Cassie shrinks herself to miniscule size to infiltrate the facility where Vision detonates the door to Shepherd's cell. Cassie realizes that Tommy and Billy "could be...twins," but their introduction is interrupted by armed guards, and Tommy uses his powers to facilitate their escape.

Outside, the four find themselves surrounded by "armed guards, federal agents, [and] Mandroids," and Tommy uses his powers to defeat the entire battalion, nearly killing a doctor who conducted experiments on him during his incarceration before Bishop stops him. Patriot tells Shepherd that the Young Avengers mean to recruit him, but demands that he chose between beind "a super-powered teenage terrorist" or "a super hero."

From a remote house on Earth, the Super-Skrull attempts to transmit a signal "to all Skrull member-worlds" announcing his capture of Teddy, who he calls "Dorrek VIII." Teddy insists that he is not a Skrull, but Kl'rt claims that Teddy was born to the Skrull Princess Anelle several months after the capture of the Scarlet Witch, Quicksilver and Captain Marvel, at which time Anelle's father, Emperor Dorrek VII, ordered Teddy's execution. Kl'rt explains that Anelle's nursemaid "ferried the child off-world to reunite him with his father."

Teddy demands to know who his father is, but Kl'rt answers only that he intends to see Teddy reclaim the Skrull throne in order to reunify the Skrull member-worlds. The conversation is interrupted by the arrival of the Young Avengers, and Kl'rt attacks Wiccan before Shepherd and the Vision attack Kl'rt, with the Vision subduing the Super-Skrull. Before the team can leave, Kl'rt tells Teddy that the Skrull people need him, but he is shot by a Kree soldier, who claims that Teddy is not a Skrull but a Kree.

Retrieved from "https://heykidscomics.fandom.com/wiki/Young_Avengers_Vol_1_10?oldid=1551013"
Community content is available under CC-BY-SA unless otherwise noted.