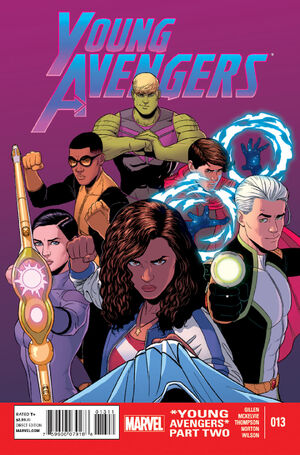 Oh, ugh. Is love really going to save us all?

• This periodical plans to include an above-industry average amount and standard of drama, conflict (both internal and external), action set-pieces. It will include 20 pages of comic art. It prominently features heroic attempts to save the world and kissing.

Retrieved from "https://heykidscomics.fandom.com/wiki/Young_Avengers_Vol_2_13?oldid=1471074"
Community content is available under CC-BY-SA unless otherwise noted.