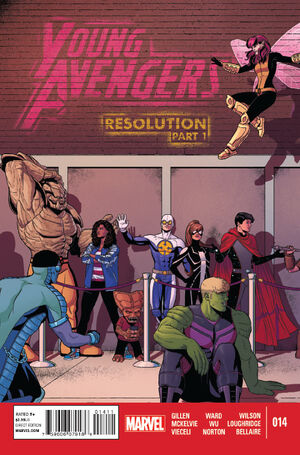 You know... The girl of your dreams? You had her. And you were so locked inside your head you didn't even notice.

• We gather in a night club, and have a string of connected and overlapping stories starring our cast. It’s a completely and unprecedented approach to a story in comics history. There are no parallels. We refuse to accept it.

•Team Young Avengers are joined by an all-start cast of some people we really like. Each individual section gets one individual artist. It’s a metaphor, probably.

• It’s been one hell of a year. In two episodes, one before and one after the new year, the Young Avengers get resolution. You guys do as well.

Retrieved from "https://heykidscomics.fandom.com/wiki/Young_Avengers_Vol_2_14?oldid=1471075"
Community content is available under CC-BY-SA unless otherwise noted.