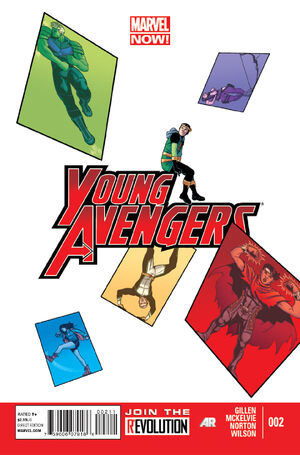 • Has Wiccan made a horrible mistake that comes back to bite everyone on their communal posteriors? Spoilers: Yes.

• Does this guest star the Uncanny Avengers? Spoilers: Also Yes.

• A figure from Loki’s past emerges. Friend? Foe? What will it be? Spoilers: It’s Foe.

The recap page is a parody to the famous website "Tumblr", here it's called "Yamblr", the two first letters for the initials of "Young Avengers".

Retrieved from "https://heykidscomics.fandom.com/wiki/Young_Avengers_Vol_2_2?oldid=1471063"
Community content is available under CC-BY-SA unless otherwise noted.