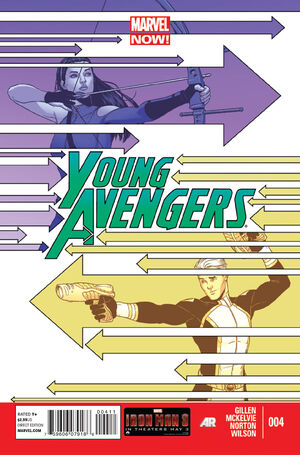 In Odin's name, the threat of imminent death and/or torture does make you mortals incapable of taking a joke. Thank the nine realms you're pretty.

Marvel Boy and Hawkeye, who just managed to shake the Skrulls pursuing them, arrive to rescue Wiccan, Loki, Hulking, and Miss America. Marvel Boy temporarily destroys the parasite and they try to escape on Marvel Boy's spaceship. The infected parents pursue them, joined by thousands of other parents including Marvel Boy's.They are firced to crash-land in Central Park, where they are surrounded. Desperate, Wiccan lends hhis power to Loki as a last resort- and Loki teleports away, abandoning them. They then prepare for the end, as Miss America stands determined and ready to fight to the end.

Star Splendor and Captain Glory are revealed/confirmed to be Noh-Varr's parents.

• A lovely day trip to Central Park for a group of cheery youngsters.

• LIES! It's not lovely as they're being pursued by bad guys and it's not a day trip as (er) it's at night.

Retrieved from "https://heykidscomics.fandom.com/wiki/Young_Avengers_Vol_2_4?oldid=1471065"
Community content is available under CC-BY-SA unless otherwise noted.