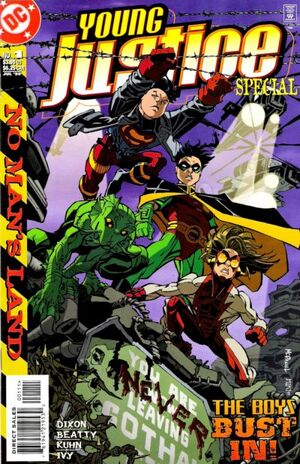 But Batman never said anything about your teammates, right? Never a mention of Young Justice steering clear of Gotham or you'd be waxing the Batmobile?

Batman has kicked Robin out of Gotham City during the No Man's Land chaos. Superboy and Impulse find a loophole in Batman's instructions, and make their way to Gotham anyway. On their way, they meet Lagoon Boy, who was hoping do some sight-seeing.

After beating one of Poison Ivy's creations named Ferak with Batman's help, they get out of Gotham and encounter the Kobra Cult. The team foiled Kobra's plans and then returned to their base.

Retrieved from "https://heykidscomics.fandom.com/wiki/Young_Justice_Special_Vol_1_1?oldid=1469958"
Community content is available under CC-BY-SA unless otherwise noted.