Start a Wiki
Part of the 'World Without Young Justice' event 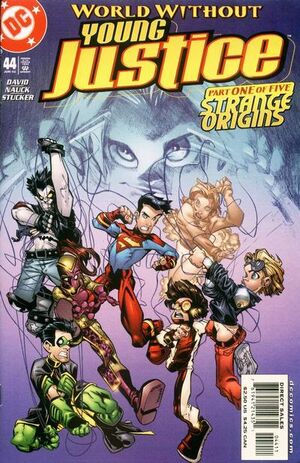 All of humanity's crazy Jason. We're humanity's children. Insanity runs in the family. What else are we supposed to do?

Appearing in "World Without Young Justice, Part 1: The World What Once We Knew"Edit

Synopsis for "World Without Young Justice, Part 1: The World What Once We Knew"Edit

In an alternate universe, Jason Todd, walking through Happy Harbor, seeks the help of Young Justice - a band of teens dedicated to helping other teens. He enters their office and tells them how he believes that he ought to be dead.

This iteration of Young Justice consists of an Arrowette wearing black, an overweight Wonder Girl blessed by Dionysus not Zeus and a male Secret who looks similar to William Hayes. Jason explains that he is a member of the circus but found evidence that it is being secretly led by Killer Croc, though Wonder Girl becomes enraged at his disregard of her wine offering the team agree to help until an apparition of Bedlam in hospital garb distracts Secret and Jason flees in the confusion.

Back at the circus Jason's father and step-mother, Willis and Catherine, argue about Jason culminating in Catherine going to see the "Voodoo Princess" - a parallel to Empress - about his assassination. Inside her carriage Catherine finds her dressed only in a snake and agrees to help with the killing of Jason and pulls out a voodoo doll and a necklace that he gave her.

Secret chases down Jason but the Princess' magic starts to hurt him as she stabs him. Before she can fully kill Jason, Secret attempts to slow her down but is again distracted by Bedlam and Jason dies.

Back in their office the Young Justice trio swear to bring justice upon the circus by burning it down and freeing the animals - who stampede Jason's family - and Wonder Girl confronts the Princess and offers to let her join. However Impulse appears from nowhere and asks for help with solving the crisis before disappearing again.

Retrieved from "https://heykidscomics.fandom.com/wiki/Young_Justice_Vol_1_44?oldid=1469871"
Community content is available under CC-BY-SA unless otherwise noted.