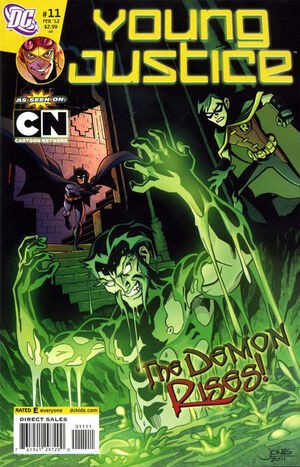 In a battle with Robin and Batman, Ra's al Ghul falls to his death, only to be whisked away by his servant to the Lazarus Pit where he can be reborn. But once he emerges, Clayface stumbles out of the Pit, too. Meanwhile, after the team attends the funeral of Kent Nelson, Artemis is placed under arrest by Green Arrow.

Retrieved from "https://heykidscomics.fandom.com/wiki/Young_Justice_Vol_2_11?oldid=1583976"
Community content is available under CC-BY-SA unless otherwise noted.