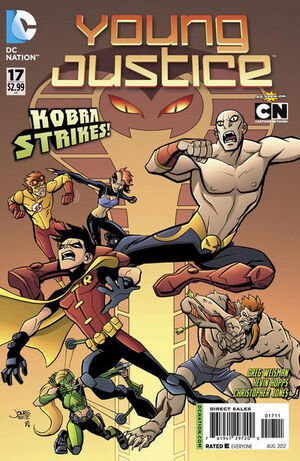 Kobra summons a giant snake, and the senior partners - Flash, Green Arrow, and Batman - leave the immediate battle to pursue it. This leaves the "kids" to take out Mammoth and Shimmer - but then Kobra turns himself into a snake god. Kid Flash deduces his weakness, and teamwork allows them to exploit it and defeat him.

Landmarks from the city of Minneapolis including the Campbell Mithun Tower, the Capella Tower, the Foshay Tower, Guthrie Theater, the IDS Center, the Mill City Museum, Nicollet Mall and the Wells Fargo Center are visible in this issue.

Retrieved from "https://heykidscomics.fandom.com/wiki/Young_Justice_Vol_2_17?oldid=1583982"
Community content is available under CC-BY-SA unless otherwise noted.