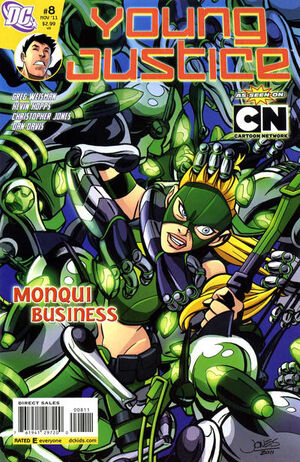 Artemis observes the team's battle with Amazo, while she fights off the horde of Monkeys that might otherwise interfere. She saves Kid Flash's life by momentarily distracting Amazo, but then departs before she's discovered. But having seen a team of heroes her own age, she knows she wants in. When Batman and Green Arrow offer her a spot on the team; however, she makes it a condition that they not reveal the truth about her family.

Retrieved from "https://heykidscomics.fandom.com/wiki/Young_Justice_Vol_2_8?oldid=1583808"
Community content is available under CC-BY-SA unless otherwise noted.