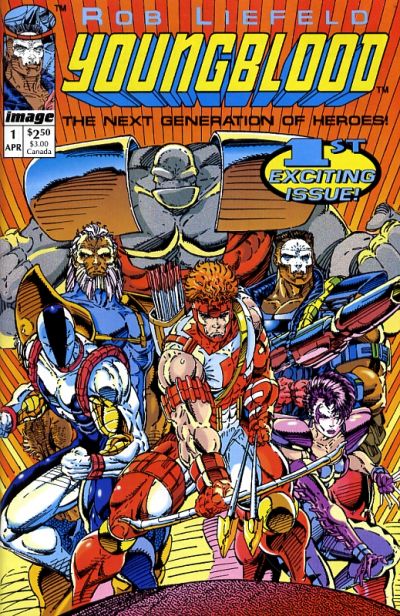 In Washington, a young man and his girlfriend are walking in the mall. A thief grabs a handbag from someone nearby, and the man, whose name is Jeff, runs after him. Tackling the man, he is about to be shot by an assassin o a nearby rooftop, but when someone shouts a warning, Jeff grabs a pen from his pocket and throws it at the assassin, hitting him in the neck. Checking the assassin, Jeff can find no ID. However, he gets a call from HQ, and has to run off.

In Baltimore, Bedrock is having breakfast with his mother. He gets a call from HQ and has to leave as well. His mother wishes him well.

At a secret underground vault in Arlington, Diehard is freed. He vows to make better use of his freedom "this time".

At his apartment in Arlington, Chapel gets the call from HQ. He tells the woman he is in bed with that she should leave her number. He puts on his costume and leaves.

In Washington, Vogue is patrolling the city. She received the message like the others, but she decides not to respond

At HQ, Shaft arrives and tells off Photon and Vogue for being late. Before he can say anything else, the team gets a call for assistance: two members of a supercrime group known as The Four were arrested, and the remaining two are now breaking them out.

On a street in Washington, Strongarm and Gage free Deadlock and Starbright. However, Youngblood arrives. Diehard ambushes Strongarm, and the rest of the team charges in after the other villains.

A news reader tells the story that a terrorist group called the Holy Unification, led by a man named Hassan Kussein, has taken control of the Israeli Occupied territories for four months. The President of the United States has vowed to send in forces, but remains siolent on whether they will be superhuman or not. A reporter on the scene has no news, but he is led away by government agents as the Youngblood away team jump out of a plane.

Combat, a member of Youngblood, admits that there are more forces than they were told in the briefing, but he doesn't care. Sentinel point out that ghe wasn't paying attention in the briefing.

After the group disasbles their foes, they try to break into a small building. However, it is protected by an energy foield and the team is incapacitated by advanced technology - except for Psi-Fire, who sneaks into the building and kills Kussein with his psychic powers.

When the rest of the team finds out, they are annoyed and angered. Sentinel sends them back to the jet and calls the clean-up crew.

The next day, a newspaper proclaims that Kussein killed himself.

Retrieved from "https://heykidscomics.fandom.com/wiki/Youngblood_Vol_1_1?oldid=1474155"
Community content is available under CC-BY-SA unless otherwise noted.