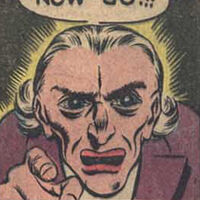 Doctor Zadar was a minion of the man known as Satan, who wanted revenge on the super-hero called the Comet. So Satan made a deal with Zadar in order to control the Comet and hypnotize him into committing several robberies and tarnishing his reputation. in exchange for this service, Satan promised him half of all the money stolen by the Comet.

Soon after Satan began amassing a fortune in stolen money, Zadar learned that Satan was double crossing him and was keeping all the money for himself and giving none of it to him. Zadar then sent the Comet to kill his partner. The Comet did indeed disintegrate Satan into nothing, but he then accidentally did the same to Doctor Zadar. With Doctor Zadar dead, the Comet came out of his hypnotic haze and returned to normal.

Retrieved from "https://heykidscomics.fandom.com/wiki/Zadar_(Earth-MLJ)?oldid=1581721"
Community content is available under CC-BY-SA unless otherwise noted.