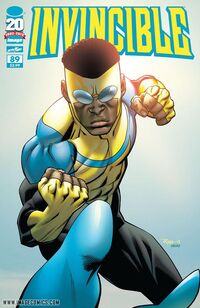 Bulletproof attended the auditions for the new Guardians of the Globe held after the original Guardians were murdered. At this time he was not selected; however, after Robot's chosen team failed to live up to expectations, Donald, the Guardians' government liaison, made some changes to the team, including adding Bulletproof to the roster.

As well as being super fast and having the ability to fly, Bulletproof is apparently almost as invulnerable as Omni-Man, although, according to Bulletproof, "not nearly as evil." Despite his supposed invulnerability, early in his career with the Guardians of the Globe, Bulletproof was hospitalized for several weeks after an encounter with the extraterrestrial creature Battle Beast. He has subsequently made a full recovery and remains an active member of the Guardians.

Retrieved from "https://heykidscomics.fandom.com/wiki/Zandale_Randolph?oldid=442373"
Community content is available under CC-BY-SA unless otherwise noted.