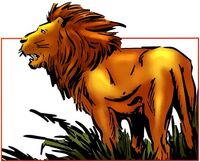 Look, Zar has killed two of them and driven Fat-Face away!

Zar was a lion that lived in the Belgian Congo during the 1930s and 1940s. He was a companion of Ka-Zar (David Rand) and mated to the female lion Sha.

In 1921[1], when the Rand family crash landed their plane in the region, Zar watched over them, curious and suspicious of the humans. However one day, Zar got caught in a quicksand and would have certainly drowned if not for young David Rand who rescued Zar, earning the lion's respect. Later, when jewel hunter Paul de Kraft murdered David's father John, Zar saved the boy before de Kraft could kill him as well. Zar adopted David as his brother, earning him name "Ka-Zar" which meant "Brother of Zar".[2]

After meeting Trajah the elephant, Zar brought Ka-Zar back to his cave where Sha was less than impressed with the new "addition" to their family. Unknown to either Zar or Ka-Zar, Sha was pregnant with Zar's cubs. She soon gave birth to Zoro and Sulani. Zoro was soon captured by the ape named Bardak who sought to obtain a mirror that Ka-Zar had claimed. Ka-Zar slew Bardak and rescued the cub. This rescue earned Ka-Zar the trust of Sha, ending the tense relationship between the two.[3]

Zar then accompanied Ka-Zar on his many adventures across the jungle like when he helped Ka-Zar in frightening off game hunter Steve Hardy, and later to survive an attack from N'Jaga the leopard.[4] When Paul de Kraft returned to the jungles to hunt for more jewels, Zar joined Ka-Zar in trying to get a revenge for John Rand's murder years earlier. Zar was caught in the cross-hairs of Ed Kivlin, de Kraft's partner, but was saved by Ka-Zar who slew de Kraft, avenging his father's death.[5] Later, when Ka-Zar clashed with N'Jaga again, Zar warned the youthful adventurer of the leopard's treachery.[6] Later, Zar joined Ka-Zar, Trajah, and Nono the monkey in forcing out a poacher named Fenton from the region.[7] Zar also aided Ka-Zar in rescuing Mara Rice from murderer Red Skelton.[8]

Ka-Zar and Zar came regularly to the aid of humans stumbling into trouble in the wilds of the jungle. They helped to free natives enslaved by mining engineer Lester Drake[9] and clashing with N'Jaga again, helped Rita Grey out of the jungles from the hands of the Wabi tribe.[10] Zar also aided Ka-Zar in capturing escaped criminal London Jack.[11]

When Ka-Zar attempted to stop the ruthless hunter Rajah Sarput, Zar was injured and captured. Impressed by the lion's strength, Sarput allowed the animal to heal before hunting it in the wilds. Sarput never got the chance as Zar was stolen by a big game hunter named Bradley who wanted Zar for a zoo exhibit in the United States.[12] Ka-Zar came to Zar's rescue and the two escaped from Bradley's ship just as it was pulling up to port in New York City. There Ka-Zar and Zar were drawn to a nearby zoo where they attempted to free the captive animals until confronted by the police. Ka-Zar surrendered for fear that Zar would be shot and Zar found himself locked up in the zoo himself.[13] Ka-Zar was saved from prison by his ally Ruth Wilson and her father. Not liking civilization, Ka-Zar snuck out into the night and freed Zar from his prison.[14] The two were smuggled aboard a ship heading back to Africa by the Wilsons. However, while at the sea it was sunk by a U-boat of the Nazis.[15]

Surviving the ship's sinking, Ka-Zar and Zar were brought aboard the U-boat. When Ka-Zar fought the Nazis for attempting to shoot Zar, the Germans decided to leave the two at sea to die. This never happened as the U-boat was attacked and sunk by a British destroyer. Brought aboard, the captain agreed to have Ka-Zar and Zar flown back to Africa. Along the way, their plane was attacked by Italian fighters. Although their plane was shot down, Ka-Zar and Zar survived thanks to parachutes and escaped into the jungles.[16] Returning to their home, Zar aided Ka-Zar and Trajah in eliminating the threat of Rajah Sarput, who had been slaughtering animals in the region in their absence.[17]

Ka-Zar then tackled both Nazi and Italian armies across Africa without Zar. Zar's subsequent activities remain unrevealed, although given the average lifespan of lions Zar is likely dead.

Retrieved from "https://heykidscomics.fandom.com/wiki/Zar_(Earth-616)?oldid=386082"
Community content is available under CC-BY-SA unless otherwise noted.