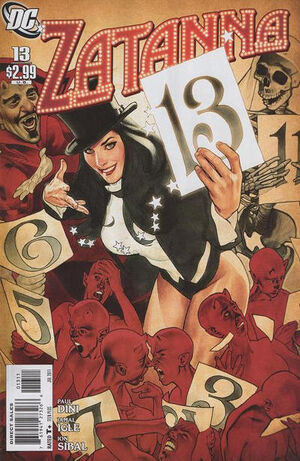 Appearing in "The Cat with the Crystal Ball Eye"Edit

Satanic sorcerer Brother Night lost his magical powers when Zatanna defeated him atop Mount Diablo. But in prison, he's forged a bloody pact that could make him the most dangerous nemesis she's ever faced! Last time, her friends barely escaped with their lives; this time, they might not be so lucky!

These contents were originally solicited to run in Zatanna #11.

Retrieved from "https://heykidscomics.fandom.com/wiki/Zatanna_Vol_3_13?oldid=1672585"
Community content is available under CC-BY-SA unless otherwise noted.